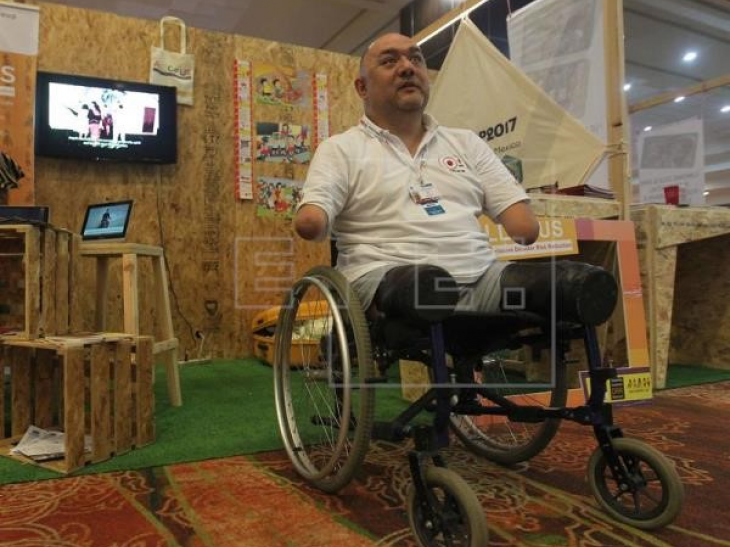 In one of its articles, the EFE agency interviews Carlos Kaiser, director of NGO Inclusiva and representative of the GIRDD LAC Network, in search of answers to questions about reality, statistics and diagnoses related to people with disabilities in disaster situations.

We reproduce below that article of EFE: NGO advocates for diagnoses about people with disabilities in disasters

The director of ONG Inclusiva, of Chile, Eduardo Kaiser, poses during an interview, Friday, May 26, 2017, within the framework of the Global Platform for Disaster Reduction 2017, event in charge of the United Nations Organization (UN) in the city of Cancún, Quintana Roo (Mexico). EFE

It is necessary to correct the models that do not include people with disabilities in disaster situations and to start recording the numbers of people who acquire one or die because of it during an emergency, said Carlos Eduardo Kaiser Mansilla, director of NGO Inclusiva, of Chile.

"If there is no effective diagnosis of what the problem is, the solutions will never come," said Kaiser, who also heads the Network for Disability Reduction in Disability in Latin America and the Caribbean.

In an interview with Efe in Cancun, where he participates in the Fifth Global Platform for Disaster Risk Reduction, he considered that it is necessary to accelerate the work related to inclusive management applied to disability issues.

"There is no consideration with people with disabilities because until now we were not taken into account in the statistics of emergencies and disasters; It is an issue that was promised to change from Sendai (Japan) "at the world conference on disaster risk reduction in 2015, he said.

For the leader of Inclusiva, who lacks all four extremities, current models present an "error of omission of variables" that leaves out millions of people.

"In this case, 15% of the world population was omitted. According to the latest report of the World Health Organization, one in three people has some relationship with a person with disabilities, and more than one billion people live with some type or degree of disability, "he said.

Therefore, he added, "it is obvious that in an emergency situation this person will be affected and also those around her."

"It happened to us in Haiti: the number of people who suffered an amputation after the tremors (of 2010) is very great. There are people who already have a disability and acquire a new one because of a disaster or aggravate the condition they already had. This can happen through the lack of treatments or continuity of these," he said.